Stevens-Johnson Syndrome (SJS) and its more severe form called Toxic Epidermal Necrolysis (TEN) are serious life-threatening catastrophic skin disorders, which can also result in blindness, organ dysfunction and death. Symptoms include rashes, redness, blisters and eventually can entail the shedding of major parts of the victim’s body surfaces. Stevens-Johnson is almost always caused by a strong and severe allergic reaction to certain over the counter and prescription drugs. 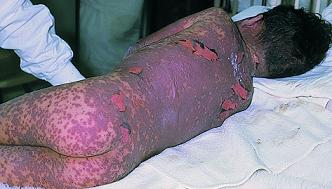 In SJS cases involving ibuprofen-based products such as Motrin and Advil, there was a lack of warning about possible allergic reactions. Without warnings and education about the symptoms associated with SJS, mothers and fathers continued to give their children ibuprofen-based drugs allowing for a simple skin problem to progress into a life-altering condition such as SJS or TEN. SJS is a painful disease, which can cause graphic skin loss of between 10% and 30% of total skin mass. TEN is recognized as an even worse form of SJS where more than 30% of the body’s skin mass is affected and as many as 35% so afflicted, die.

It wasn’t until a concerned group of physicians petitioned the FDA for a label change that consumers finally got any warning of the potential risk of SJS and TEN being associated with allergic reactions to Children’s Motrin. It took a group of citizen doctors to make a change that the drug company had refused to make, and unfortunately for many this change was too late.

SJS is an inflammatory disorder of the skin triggered by an allergic reaction to certain drugs including:

If you believe that you, or a friend or family member in your care may be having an allergic reaction to a medication that has symptoms of Stevens-Johnson Syndrome, discontinue all medications immediately and get to a hospital.

TEN (Toxic Epidermal Necrolysis) is considered the more severe form of SJS where over 30 % of the body is affected. To learn more about TEN click here.

If you or someone you love has been experiencing complications from taking the drugs listed above, Click HERE for a free evaluation of your case by the Law Offices of Brian D. Witzer.